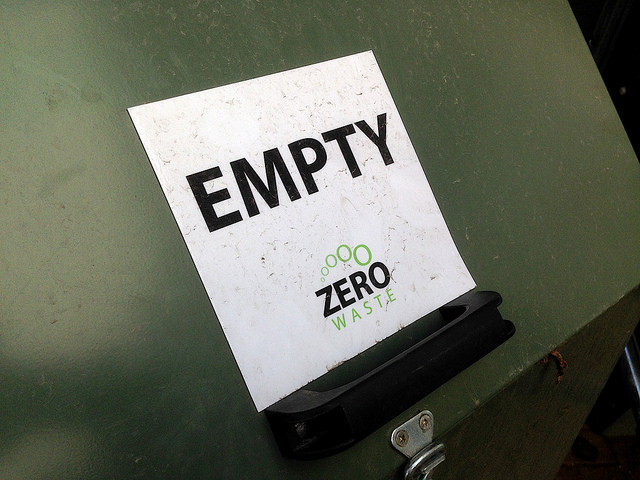 K: Can you explain the movement of “zero waste” or the zero waste movement?

M: zero waste is . . . like the, I don’t even know how to describe it, it… the goal is to not make any trash and our economy is linear and it doesn’t really allow for that so things are made with the purpose of them being thrown away, for the most, 99% of the things we buy are thrown away within 6 months which is crazy . . . capitalist society . . . majority of things are not meant to last and our society depends very heavily on disposable goods, not necessarily depends, but they’re super common like you wouldn’t think to do anything otherwise Like getting a plastic cup at Starbucks, getting a disposable fork at the cafeteria, disposable napkins! Just like throwing away your toothbrush when you’re done with it . . . you don’t really think about it . . . zero waste is like the movement to not create waste or be more aware of your waste, like it is impossible, our economy doesn’t allow anyone to make zero trash, your gonna accumulate some trash … I think the movement is being aware of your own trash and coming up with solutions and discovering different options to avoid waste or avoid creating waste

K: As someone who partakes in this movement of “zero waste,” what are some things you do in everyday life to maintain this way of life?

M: There are so many little things that I do that just add up . . . big thing is my food, majority of the food that I eat is not processed so I eat a lot of whole foods . . . buy things in bulk and use my own bags, so I avoid plastic packaging . . . I cook all my own food . . . I compost all my food cuz like a lot of waste is food waste and that can be like recycled and put back into the earth-

K: yeah I read somewhere that like over 30% of trash is food waste and can be composted

M: Right! Right yeah! Which is ridiculous I mean it’s so much . . . which is crazy cuz like before I didn’t even know that composting was a thing, I was just like oh you have to throw this away . . . I think it’s just a lot of people don’t know, so yeah but yeah lots of food stuff . . . really easy things like using reusable bags, I have my own water bottle, my own coffee cup like I’ll take it coffee places and have them fill it up or use a mug there . . . I have my bamboo utensils that I take everywhere in place of like plastic forks and stuff um and them instead of napkins I bring little towels . . . to clean my hands with or whatever . . . that’s it I think like it’s just like really small things

M: yeah like it’s just a quick fix that I feel like lots of people don’t think of

M: How does the zero waste movement view the fashion industry?

M: oooo . . . that’s a big thing . . . takes into account and like criticizes the like first world like American . . . fast fashion industry and like a lot of like waste is textile waste and like a lot of clothes, like everything else are basically disposable, there um . . . it’s not quality clothing it’s like only made to be in fashion for a very short amount of time . . . then it’s like not useable anymore or not “cool” anymore. And then also like it’s not made ethically . . . lots of the work is outsourced to developing countries where workers can be exploited and then we [consumers in the US] get the clothes at a cheap price and then we use it for a very short amount of time and then it just gets thrown out . . . so a big thing that zero waste encourages is using things secondhand . . . so you’re not participating directly in supporting these companies with your money, like Forever 21 or something . . . instead you are already buying things that are . . . already in the economy like I don’t know . . . say I bought a shirt like off the shelf, then there would be a need to fill that space, you know so they’d have to make another one . . . but if I bought a shirt that is already being bought by someone else there is not a need to like fill that spot . . . you know? . . . buy secondhand EVERYTHING, like buy secondhand furniture, um clothes and like a big thing is like repairing stuff . . . if stuff is kinda old or needs to be mended people just throw it out and buy a new one, when like you can just mend it, you know

K: That kind of answered my next questions, but it was: How do you approach getting/needing new clothes?

M: Oh yeah! Second hand stores. And it’s like way cheaper too and you can find like quality clothing for a super low price . . . um yeah and another thing is like borrowing clothes . . . borrowing stuff from your network of friends and buying second hand. Same goes for appliances . . . it’s just like sharing . . . or like renting stuff is good too

K: where do you usually shop for clothes? And why do you like these places?

M: I shop second hand . . . I used to really like H&M and Forever 21 because I was in like high school and I didn’t know how bad it was *laughs* but now I thrift shop . . . and I try to like jus like not shop at all, unless I really need to . . . I’m becoming more aware and trying to minimalize my wardrobe and like I used to have, and I still have some clothes that are just sitting that I don’t wear. . . and I’m just like why do I still have this stuff . . . you put like false . . . like false meaning in it . . so I’m just like trying to be more aware of my possessions like, do I really need this . . . people like to shop, like I think that is something that our society encourages . . . like shopping and like capitalism, so yeah I try to just not shop at all, but like when I need it I’ll go second hand

K: Have you ever heard of the term fast fashion?

K: yes you just mentioned it

M: Yes I watched a documentary on it freshmen year and I was like shook, I didn’t really know much about it until I watched it . . . called like “The True Cost” . . . made me really mad, but like for a good reason, like I’m more aware . . . that the thing American people are so privileged that they don’t have to think about . . . they just get to pay a cheap price and move on with their life but like someone’s paying the price, ya know

K: Is there anything that you do to combat fast fashion and promotes a sustainable fashion industry?

M: I think just secondhand shopping and I think a big thing is sharing the information with people . . . like sharing the knowledge that I have with others . . . I think like making it a fun thing too, like making a day out of thrifting or like teach people about what they don’t know

K: I think what your saying is like awareness?

M: Yeah! Yeah because a lot of people don’t know and like if I didn’t watch that documentary or even like go to college I wouldn’t know . . . it’s crazy to think about

K: As someone who is a part of the zero waste movement how important is it to you that the fashion industry imposes sustainable practices when it comes to the creation of new items of clothing?

M: So important, I think like . . . I don’t know how were going to get big companies to realize . . . cuz what they’re doing profits them and like in our capitalist society you gotta make profit, and like that’s why they exploit workers, that’s why their textiles aren’t quality . . . so like I don’t know how were gonna take down that process . . . it’s important that like more ethical companies become more popular, like stuff like Patagonia . . . good quality companies, and I think its important too like okay . . . good quality clothing is expensive and that’s why its so like inaccessible to a lot of people cuz it is so expensive, but I also think it’s important that these ethical companies do other things, like Patagonia is involved in a lot of other environmental stuff and they also make like sustainable clothing . . . companies with a mission to create sustainable clothing but like also help the environment or the community is important . . . like philanthropy

K: Thank you for allowing me to interview you, is there anything else you want to add, like about the topic or anything?

M: I am privileged to be able to participate in a zero-waste movement . . . a lot of people don’t have access to a grocery store in bulk or the money to purchase things in bulk or like shop at really nice grocery stores you know, I think the important thing for me to do what I do is because other people can’t. I do it for them and the environment :-)

Preferred Pronouns: she, her, hers

Participates in the Zero-Waste Movement

I chose to interview my friend Milan Granillo, a second year Linguistic and Spanish double major from Norwalk, CA who actively partakes in the zero-waste movement. As she explains in the interview, participants in the zero-waste movement are very waste-conscious and have the overarching goal to not make any trash. For instance, Milan explains that being a part of zero-waste is being aware of the trash you produce and making small decisions to minimize that trash as much as possible. I was interested to see how her background and beliefs as a zero-waste proponent would influence her thoughts on the fast fashion industry. I talked to Milan a lot about what the movement is and how her life has changed since she started participating in it, but I will mainly be focusing on her answers to the questions regarding fashion and the fast fashion industry.

When talking with Milan, I recognized that she emphasized the importance of awareness within our society, and how often many serious issues are ignored simply because the average American has no knowledge about the subject. When going back over and coding the transcript, I noticed a theme consisting of a global outlook, or a concern for ethics, the environment, and society. Milan revealed to me she believes it is “important that more ethical companies become more popular” and that it is important for her to participate in the zero-waste movement “because other people can’t. I do it for them and the environment.” Even though she has never lived outside the United States, I believe that her increasing self-awareness has influenced her to view things from a global perspective.