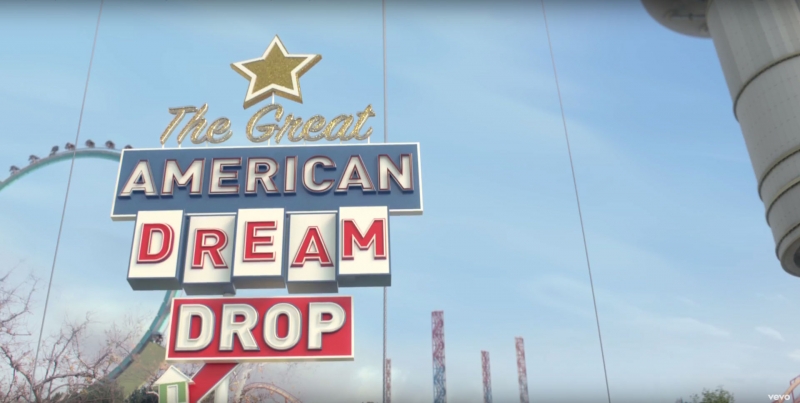 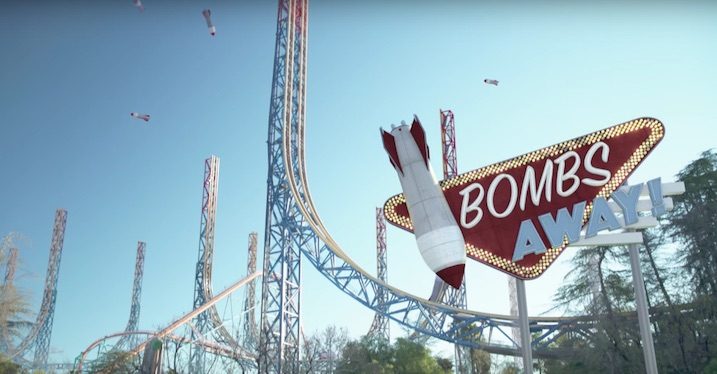 Throughout the video, there is a constant irony of having a theme park modeled off the nation’s issues. For example, the ride labeled “The Great American Dream Drop” is a metaphor for the housing crisis. Heterosexual couples step into suburb-style mini houses, the houses then get pulled up in the air and dropped back down again. The housing crisis left many families in debt and the US in an unstable economic condition; nevertheless, the couples are seen giggling as they step into their house. This selective absurdity is shown to emphasize the idea that people are becoming numb to societal issues.   The ride “Bombs Away” shows roller coaster cars shaped like nuclear bombs shooting straight up into the air. Earlier on in the video Perry gets offered a large mass of cotton candy shaped like a mushroom cloud. These images of bombs and nuclear clouds are usually seen in a negative light; in Oblivia however, nuclear warfare is trivialized and guests seem apathetic to the danger. This visual irony enhances the song’s message of societal unawareness, and the inherent threat that it creates.

This irony creates a creepy, ominous feeling for the audience. At first glance the park is full of joy and happy park-goers, but once the audience begins to make connections about what the rides represent and understand that the visitors are just pawns, oblivious to the serious issues around them, a sense of dread starts to appear. The visuals produce a warped theme park, like a creepy carnival, only instead of carnies and overly obvious scares, this park plays on dramatic irony where guests are clueless to what is happening but the audience knows everything. This distortion forms the idea that visitors can only leave the park when they are allowed to do so, they have no freedom when they are there and they are completely unaware of this fact. This emphasizes Perry’s message that society’s unawareness contributes to their lack of freedom.  Society is too caught up in the trivial and materialistic features of life, this video is a message to the masses to become more involved and aware.

I wanted to add more detail to explain the evidence behind my central idea of this "Oblivia" society/theme park not having any freedom.  I added a paragraph going into detail about my thought process regarding it, and how the visual clues also emphasize this lack of freedom.  I believe that the second paragraph creates a stronger argument and helped the audience to understand where I was coming from. 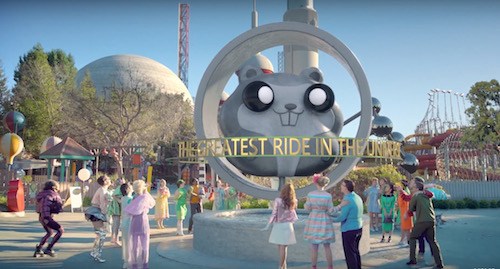